With the planks glued up to full length, it is very nearly time to glue them to the boat. There are just a few things that need to be tended to first. 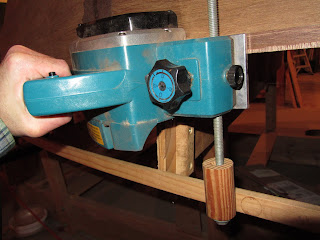 First, the plank lands have to be shaped. There is very little angle between the sixth strake and the sheer, so not much has to come off, but it needs to be done. I do this with my power plane; you can see the setup here. I clamp a batten to the moulds, along the sheer. A length of threaded rod is tightened in the hole for a guide rod. The end of the threaded rod has a short length of 1 1/4" dowel with a hole drilled through it's center. The hole is just the right diameter that if the plane and batten are set on a flat surface, the dowel will ride snugly on the batten. Thus, the bottom surface of the batten and the cutting surface of the power plane are in the same plane.

It works all right. The position of the rod needs to be adjusted as you go, and it takes some effort to work around the clamps, but it's not too bad. Of course, I always control the plane with two hands. This photo is staged, with one hand holding the camera, and the power plane unplugged. The biggest temptation is to try to take off too much wood too fast. Take it easy, and work carefully, especially on the shallow angle of this last strake. Do I take my own advice? No. But epoxy can hide a lot of things... 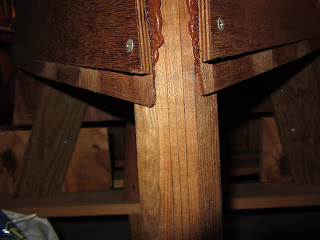 When I worked on the planking up to this point, I made every effort to keep the two sides of the boat symmetric. Nonetheless, errors crept in, and more on one side than the other.

Here you can see the stem, with the planking on the port side about 3/8" lower than the starboard. I had hoped that errors on one side would be balanced out by errors on the other, but it didn't turn out that way. Since the sheer strake has to exactly match the sheer line at the stem and frames, there is no room for slop on this plank. 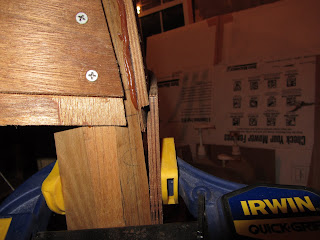 Here you can see a test fit of the port side plank at the stern. Like the bow, it is a little lower than the starboard side. So the port side plank needs to be reshaped a bit to fit into the gains cut into the sixth plank at the stem and stern. Of course the plank has to be reshaped quite a bit along it's length to keep a fair curve. I marked the new edge at the end of the plank, and then used a batten to make a fair curve into the edge of the plank about 5' or so in from the end. This was cut out with a saw, and then brought down to the line with a hand plane. After a few test fits, and checking the curve by eye, everything fit into place. This all had to be repeated at the bow. 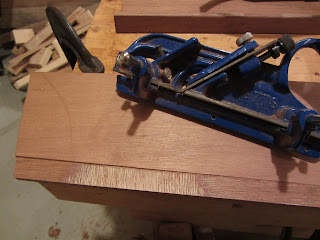 Next, it is time to cut the gains in the sheer strake. The purpose of these gains is so that the overlapping planking at the bow and stern will lie flat, in line with the stem and stern posts. It is possible to cut these on only one of the two planks but I didn't like the idea of trying to clamp the planks in place without damaging a feather edge on one of them. There is a lot of twist in the first few planks, and a lot of that pressure is on the edges. I've made a practice of cutting the gain through five layers of the plywood on the lower (earlier) plank, and then through two layers on the upper (later) plank before it is glued in place. This seems to have worked pretty well. Here you can see that I cut the gains with my Record rebate plane. 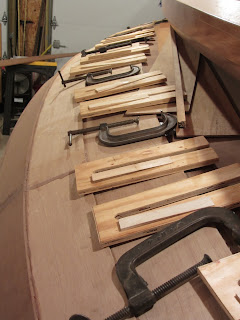 These things having been done, it is finally time to glue the planks to the hull. This always takes much longer than it seems like it ought to. It helps to have everything laid out in place and ready for quick application. The real problem isn't the time it takes to clamp things in place, though. The problem is that it takes an awful long time to (1) coat the edge of the plank to be attached with unthickened epoxy, (2) coat the plank land on the hull with unthickened epoxy, and (3) get a good layer of thickened epoxy on the plank land.

I begin by doing a dry fit, clamping everything in place, and making sure that the plank is lined up just where I want it. Then I drill a pilot holes for three screws to hold the plank to the stem post and three at the stern as well. These screws are temporary, and will be removed after the epoxy sets. Then I make some register marks - lines on the edge of the plank that continue onto the hull. Once everything is epoxied, matching these lines ensures the plank is in the correct position, or very nearly. Driving in the screws ensures it is just where I had it for the dry fit.

I usually begin with a coat of unthickened epoxy on the plank land. I brush it on with a disposable foam brush. It goes on more easily if the epoxy is warmer, but then it kicks off faster, too. I use System Three's "ketchup dispensers" to measure my epoxy. One squirt of epoxy and a half squirt (they have a little clip that limits the dispenser to a half-squirt) of hardener is plenty to coat both the plank land and the edge of the plank. But you have to work quickly, or it will start to gel before you are done. 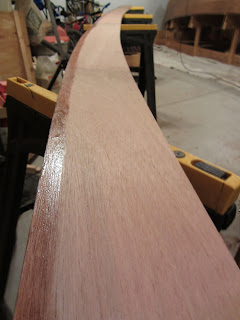 Then I mix up a batch of thickened epoxy. I have a big tub of wood flour from System Three. I find the perfect measuring tool is the scoop that comes with powdered baby formula. For a squirt-of-epoxy-and-half-squirt-of-thickener mixture, one of these scoops of wood flour makes a slightly-runnier-then-honey mixture, two and a little bit will make a thicker mixture that won't run, even on a vertical surface. It takes several batches to cover the whole length of the boat, but I mix them one at a time. The epoxy cures more slowly spread out on the boat than in the mixing bowl. Invariably I end up needing just a little bit more, and end up wasting most of a batch. Oh, well.

Then it is time to bring the plank to the boat and get things lined up as best I can. First I get it "close" and attach on C-clamp near the center, at the 5th or 6th station. Then I get the edge lined up correctly and attach another clamp. Then I work my way along, attaching a C-clamp at each station mould, checking the alignment as I go. I screw a small block to the mould to give the clamp something to hold on to. 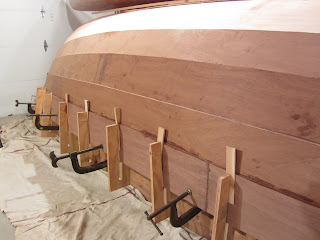 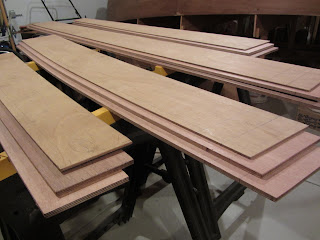 is where I left things in the previous construction post. From the start of construction, I had planned to paint the hull. Consequently I had not been concerned with matching the grain or color of the planking stock.

Interestingly, the "meranti" plywood I'm using seems to alternate between layers of lighter and darker wood. The lighter wood seems a little less dense than the darker - almost like the ocume plywood I used to build a kayak, once upon a time. Most sheets have the darker wood on the outer face, but some have the lighter. You can see the difference in the pictures that show the hull. The color of the darker plies can vary considerably, too, even on opposite faces of the same sheet.

Well, the thought had come to me that I might like to leave the sheer strake finished bright, while painting the rest of the hull. I very carefully chose plywood that had face veneers with matching color, at least on one side. Unfortunately, though, when I traced the patterns for each section of the plank, I didn't pay attention to which side was up. Once I cut out the sections, there was no way to line them up so the colors matched correctly. Oh, well. Paint it is.

Now you may have seen in the post about my scarfing jig how I cut the scarfs to join the four parts of each plank together. So, the scarfs having been cut, it is time to start gluing the planks to full length.

If you look in the lower right of this picture 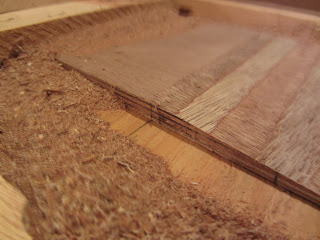 you can see a pencil line on the edge of the plywood. This marks the center of the scarf, and, when gluing up, aligning these pencil marks makes sure the plank will fit properly on the boat. 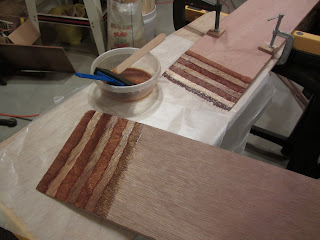 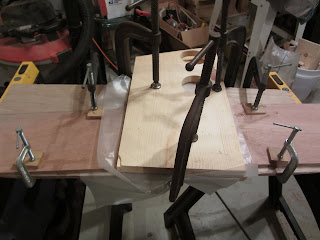 ...and clamped into place. The small silver clamps keep everything aligned, while the larger C-clamps put pressure on the joint. Wax paper between the joint and the scrap wood keeps the whole assembly from sticking together, and also leaves a fairly smooth surface that requires only a little cleaning up. First I use the small clamps to hold one side of the joint against a board underneath (with the scarf face up). After applying the epoxy, the other side is lined up, and clamped to the same board, holding the joint steady. Then the larger clamps are added, squeezing the joint between two pieces of scrap large enough to cover the area of the joint.

That's the theory, anyway. It's worked beautifully for the first 40 or so joints. Halfway through this final plank, though, something went amiss. I don't know if my pencil line was off, or if the setup slipped while I was gluing it up, but when I checked the next-to-last scarf to see how they fit, they didn't. Aligning the section of the plank with frames 3, 4, and 5 put things out of alignment by a couple inches at the bow. No way to finesse that!

So I cut one end of the joint off, shaped another plank-piece using the same pattern as before. (Is there a term for the sections of plywood that are glued up to make the full length plank? It seems like there ought to be.) Recut the scarfs. (It was sort of interesting to cut down to the glue line in the old piece.) 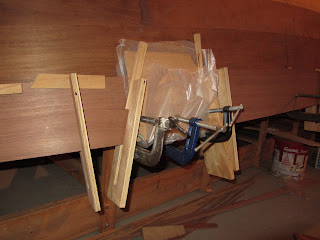 I didn't want to make the same mistake again, so I decided to glue the last four scarfs on the boat, like everybody else does. It wasn't as bad as I feared. It required a little more clamping ingenuity, and a little more effort to clean up the squeeze-out. All in all, though, not too bad. The full length planks seem to have a slight kink around the joint that I had to cut apart, but on the boat it looks pretty fair. I may have to adjust the sheer a little after I turn the boat over. Oh, well. I'm building a boat to use, not a museum piece, right?

Field Trip: The Nina and Pinta

I had hoped to have the sheer strakes ready for installation by now. Well... that didn't quite happen. But that's a story for another day. For now, I thought I just show you some pictures of a couple incredible replicas of Columbus' Nina and Pinta. These ships travel around the country, spending a few days in each port. Maybe they are coming to a city near you! 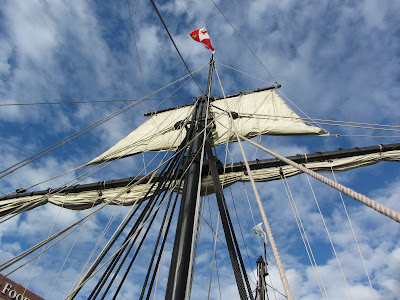 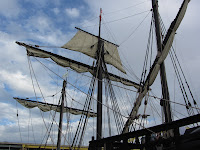 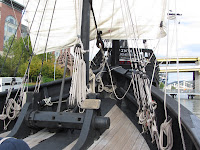 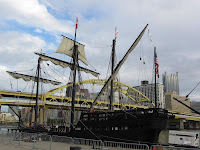 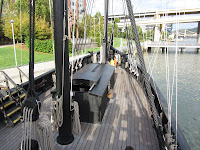