Here is where we left things in the last construction post: 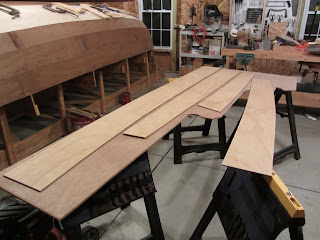 The patterns for the sheer strake had been cut out and shaped. Now it is time to get out the marine plywood. This seems like a big step, a momentous occasion. I'm really working on my boat again. When people ask me "How is the boat coming along?" I no longer have hang my head and admit that it is not coming along at all. I can look them straight in the eye and say "I'm working on the sheer strake. After that it's the stem and stern posts and the keel. Pretty soon, I'll be turning it over!"

Well, maybe I shouldn't get ahead of myself. 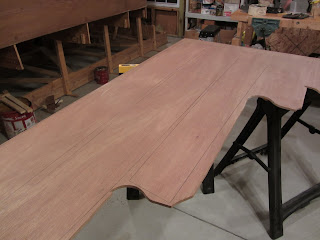 I traced out the patterns onto the plywood. After that I cut them out with my jig saw. I know that lots of people say that the jig saw won't cut a straight line, that it wants to wander. It's certainly true that I can't follow a line as closely with the jig saw as I can with my band saw, but it seems more like my fault than the saw's. It goes where I direct it, it's just harder to direct than the band saw. In any case, I saw about 5-10mm away from the pencil line. The fibers of the top ply tend to chip out, especially when cutting across the grain. 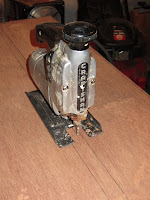 Here we see an "action shot" of my jig saw. I don't know how old it is, but it was my grandfather's before it was mine, and it is a heavy duty piece of machinery. No plastic body on this one! It runs fine, though it gets a bit hot when I run it for a long time, and it takes a while to cut out these planks. In the end, I use the jig saw to separate the planks from each other, and cut close to the line using the band saw. I didn't happen to get any pictures of that, but it you imagine someone using a band saw... that's pretty much what it looks like.

Finally, I used my router to trim the planks to the exact size of the pattern. The natural thing would be to use a template bit to do this. I don't happen to have one of those. I do have a flush trim bit, though. It's basically the same thing, but with the bearing on the bottom instead of the top. It's not quite long enough to cut both planks (port and starboard) at the same time. Oh, well. I like doing this, right? I get to do twice as much. In the end, I have two planks that exactly match each of the four patterns. 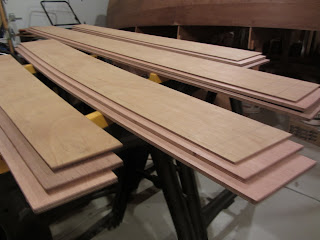 Next step... Cut the scarfs and glue the planks up to their full length.