When I began my boat building project, twelve years ago, I ordered two gallons of epoxy and two gallons of hardener from System Three Resins. I figured that would be enough to get me trough coating the hull.

In response to the question "What is the shelf life of your epoxy resin products?" The System Three product FAQ has this to say:

All solvent-free epoxies have essentially unlimited shelf lives so long as they are stored in sealed containers. The resin may crystallize or the hardener may darken but this does not affect its performance. If the material is more than a year old do a test to satisfy yourself that it cures properly.

Twelve being more than one, I did just that. I mixed up some epoxy and glued up some test pieces. I mixed a batch of straight epoxy, and a second batch to which I added wood flour (basically sanding dust, much finer than saw dust) until it had the consistency of honey. (The consistency of epoxy mixed in this way is measured on a scale from honey, through molasses, and all the way to peanut butter.) I glued up two test pieces, one of solid wood (pine), and one of the meranti marine plywood I'm using for the planking. In each case, both sides of the joint got a coat of the unthickened epoxy. Then I coated one side with the thickened epoxy and joined the pieces, clamping until there was some squeeze out all around the joint. 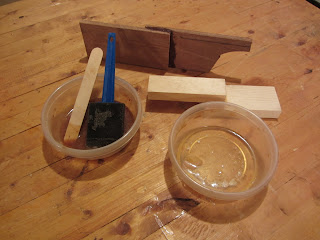 A couple days later (it was a little chilly, I wanted to give the epoxy all the time it needed to cure) the epoxy left in the mixing bowls had cured as expected. After some encouragement, I was able to pop out two epoxy disks. 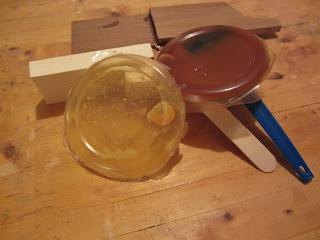 The foam brush and tongue depressor are, of course, permanently embedded in the epoxy. You can see the tip of a tongue depressor in the disk of unthickened epoxy. It wasn't strong enough to break the bond of the epoxy with the plastic bowl. There was a small patch of uncured epoxy - just a thin film less than a square centimeter - left behind in the bowl of unthickened epoxy. I assume it was not completely mixed.

But what about those joints? How strong were they? I rigged up a destructive test using my face vise and a pipe clamp. The picture below was taken just after I heard the first "crack" from the joint. 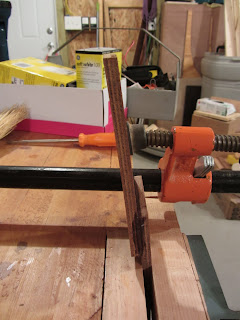 Not long after that, the piece broke, but you can see that the plywood separated between the plies, not at the glue line. 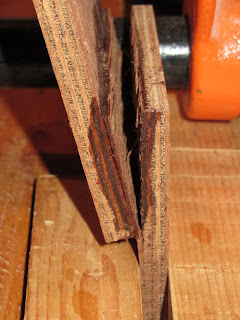 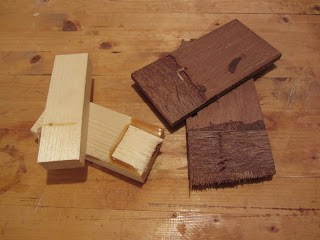 In the second picture, you can see that the joint in the pine also split along the grain, not at the glue line. I rate this test a success! That's good, because I still have about $200 worth of this stuff. I'd hate to have to replace it, but even worse, how would I throw away three gallons of epoxy and hardener that wouldn't cure? It's hard enough getting rid of old paint. It's good to be able to file this under "Problems I Don't Have to Solve."

Email ThisBlogThis!Share to TwitterShare to FacebookShare to Pinterest
Labels: materials