Working on the Keel. Decisions, Decisions.

With the stem epoxied in place, I began to work on the keel. I wasn't quite sure how to go about this, and as I was feeling my way through, I didn't take pictures for the most part. I began by crawling under the hull and marking the locations of the floors. (In a house, these would be called "joists", and the floor would be laid on the joists. In a boat, the "sole" is laid on the "floors." Just one of those nautical things.) Their locations are found relative to the "stations" which are the locations of the molds which give the hull it's shape as the planks are hung.

This may seem like a bit of procrastination, but in fact it was not. The keel bolts go through the keel and keelson, and are bolted through the floors. After marking their locations, I drilled a pilot hole vertically through the keelson with a long 1/8" bit. The keel bolts will be 1/2" and 3/8", but I wanted to drill through to find their location on the outside of the hull. That also showed me the location of each station. They are each separated by 29" horizontally, but the curvature of the hull makes it difficult to measure with any reliability on the outside of the hull. 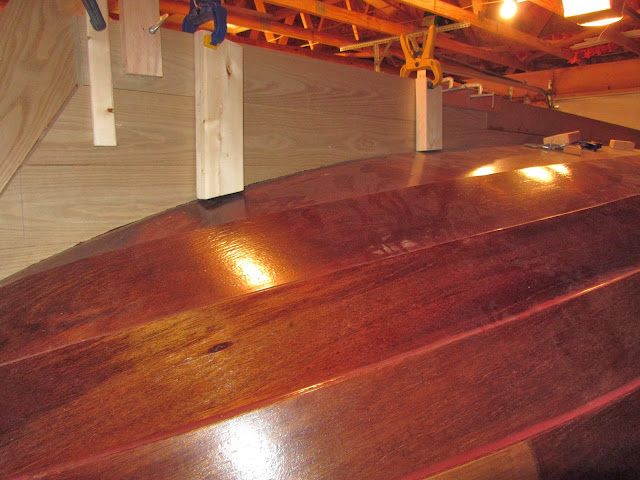 Next, at each station, I cut the end of a 2x4 so that it would stand vertically when set on the hull. I measured the depth of the keel from the planking at each station, and cut the 2x4's to these lengths. Setting them on the hull shows where the bottom of the keel ought to be. The keel runs in a straight from the 3rd station to the 8th, I was a little bit surprised that they seemed to line up exactly as they ought to.

As I said, I didn't take many photos as I was working along, but this shot from later in the process shows the 2x4's at the 7th and 8th station. 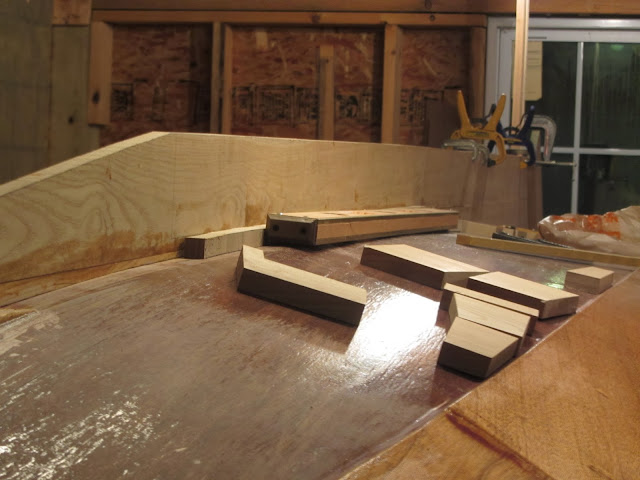 I had a nice straight clear piece of sassafras, about 5 inches wide, that I was able to clamp to the 2x4's. With the edge of the board aligned with the tops of the 2x4's, this put the board in just the right position. For most of the length of the keel, it doesn't protrude much more than this from the bottom of the planking. I was able to fill the gap between the hull and the bottom of this board with a two offcuts from the stem, scribed to fit into place. You can see them in this picture, taken after they were epoxied in place.

At this point, I was a little unsure how best to proceed. The keel is to be three layers of (roughly) 3/4" stock. Is it best to fit one layer, and then add to that, or work "from the front to the back." I'm still not entirely sure, maybe I'll have it figured out by the time I finish with it. In any case, I kind of did both. I was able to scribe three more boards to fill in the deadwood near the stern. 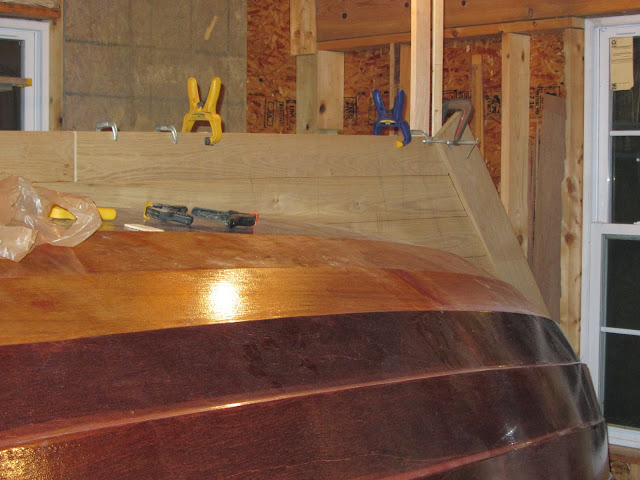 At the same time, I began work on the second layer. Probably. I say that because I have some doubts about how I will do that. Some builders of this design have let the grain in the center layer run vertically, perpendicular to the grain of the outer layers. There are a couple advantages to this, but normally this kind of cross-grain construction is not desirable. Wood expands and contracts as it's moisture content varies. As it gains moisture, it doesn't expand uniformly, though. It expands more across the grain than along the grain. Plywood is made of thin sheets of wood, glued with the grain alternating in direction. This makes plywood "dimensionally stable." It's dimensions don't change much with changes in humidity. Construction the keel in this way would make it very stable, and also less likely to warp. Certain aspects of the construction are also simplified with this approach. 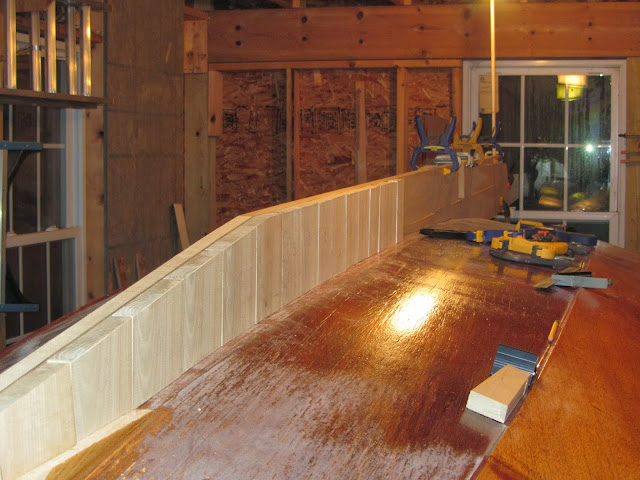 On the other hand, what will happen when the keel absorbs water, as it inevitably will, or dries out over the winter? The builders who have used this method have not had any complaints, but... Well, I don't know.

To the right, you can see the start of work on the center, vertical, layer. It's quite easy to cut these pieces to the correct shape. There are a lot of them, though, so it doesn't seem to be a time saver, though that was not the purpose. In any case, I'm a little undecided about whether to continue in this way or not. I think now that it may be just as easy to do three layers, all running fore and aft. I'll try to make some progress in other areas while I mull this over... 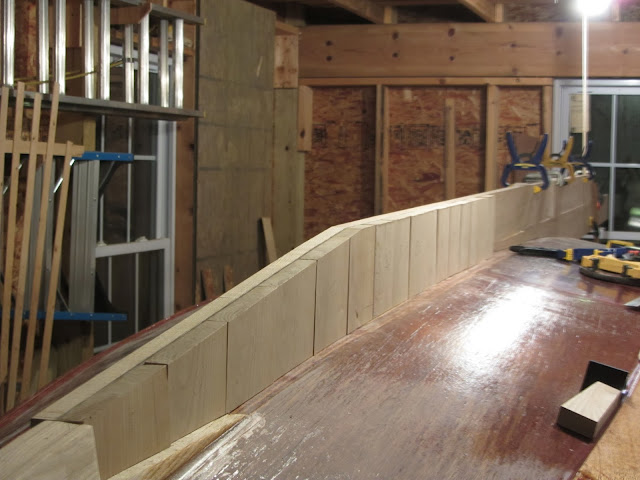 Here's another view of the situation.