How it all began

In 1997, I told my wife I wanted to build a sailboat, which I guess must have come as quite a surprise to her. We'd been sailing before. Once. On my parent's Catalina 25. But they sold the boat, and that was the end of it. As far as she knew.

Now, at this point in our lives, we lived in a two bedroom condominium in the middle of Houston. Not really the best situation for sailboat construction. It was not really the best situation for building a 20' stitch-and-glue kayak, either, but that's just what I did. My wife was very accommodating of this project, which took up most of our living room and dining area for nearly a year. But then, she is the best. Every man should be so lucky!

The kayak was finished shortly before we were to move to Pittsburgh. We paddled some in Galveston Bay. We paddled in Moraine State Park after the move. We paddled a little more in a few other places. But it wasn't sailing.

I began looking for plans for a sailboat I could build. I had read George Beuhler's book, and I liked his designs and philosophy quite a bit. I even ordered some of his study plans. But his boats seem mostly to be designed for off shore cruising. Living in Pittsburgh, that just wasn't going to happen.

I had a pretty good idea of what I wanted. I expected we would use the boat about like we had used the Catalina 25. Taking the family out for a sail, maybe going out with a couple friends. We never went for extended cruises, but we did spend a couple nights on the boat, anchored in a cove or inlet.

So there you have it. A boat that is comfortable for four or so daysailing, able to sleep two with basic accommodations. Able to sleep a few more with mild discomfort. Oh, and one more thing. An "interesting" rig. One of the things I always wished for when daysailing was more sailing to do. Sails to trim, lines to haul, and whatnot. I was looking for a cutter, with multiple headsails. Or maybe a gaff rig, or a yawl or ketch. It had to be a small package, though, to fit on a trailer, and to be a reasonable building project.

I looked at some of Sam Devlin's designs. Winter Wren and Song Wren I think. I dreamed about the McNaughton Group's Surprise 24. But when I saw Iain Oughtred's Eun Mara, I was pretty sure I'd found what I wanted.

I was in the fortunate situation of going house-hunting just after settling on this design, and so I was able to make "boatshop" a priority in choosing where to live. We found a nice Cape Cod style home with a 30x24 garage. And so in the summer of 2000, I began construction...

Email ThisBlogThis!Share to TwitterShare to FacebookShare to Pinterest
Labels: commentary 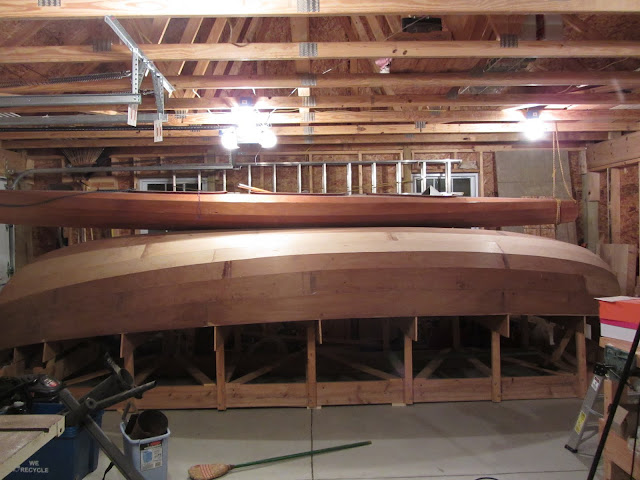 Over the past week, I've managed to put the building frame back into alignment. Here you can see the boat set up in the new garage. What you can't really see in the photo is that the floor in the new garage is not level. There are two floor drains (required by the building code) and the floor slopes toward them. The building frame was originally constructed on a flat floor, and so now has a slight sag in the middle. 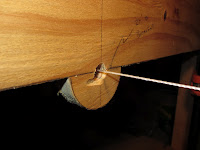 When I originally set up the frame, I used a series of holes centered on cross hairs to align the the station moulds. Running a string through these showed that some frames were over 1/4 inch out of alignment. This meant that I needed to go back an realign everything. When I first did this, I used a combination of pipe clamps and a hammer to align everything, and a spirit level, string line, and a piece of plywood cut to exactly 24" width to align everything. The two pipe clamps were reversed to work in "spreader" mode and adjusted the mould vertically on the left and right hand sides. This allowed me to get the correct height and make the frame level. Left and right adjustment was done with the hammer. 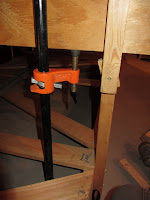 I set up the pipe clamps as before, but this time there was no opportunity to use the hammer. Raising one side of the mould would force it into the sloped hull on that side, pushing the mould toward the other side of the boat. With delicate adjustment of the pipe clamps, I was able to get each frame centered both vertically and horizontally. 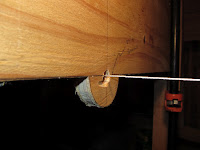 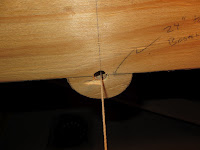 In a perfect world, the moulds would now be level as well. Sadly this was not the case. The problem, as I see it, is that the floor under the building frame is not only low in the center, but also sloped from left to right. 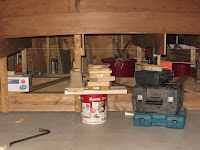 So... I used my laser level, piles of boxes and scrap wood, a crowbar and shims to make sure each frame is level. By carefully placing the laser level, I could place a laser dot on the two lower corners of a mould, which determine the position of the sheer at that station. Then I used a crowbar to lift the low side and insert a shim (or two (or three)) to make the mould level. I started by making the stem and stern posts vertical, using a small spirit level. Then I worked from the ends toward the middle. Each time I leveled a frame, I checked the others again to make sure they had not been thrown out by the adjustment. After I was done, I had all the frames within 1/16" of level.
Then, with fear in my heart, I climbed back under the boat to see if the frames were still aligned. Miraculously, they were. At least within one or two pencil-line-widths. I pronounced that good enough, and proudly told my wife what I had done and that I was ready to start building again.
"Are you sure the moulds aren't tilted fore-and-aft?"
Posted by D. Handron at 2:42 PM No comments:

Yesterday I worked on my boat for the first time in... nine years. Wow, where does the time go? I have a son who will turn eleven in a few months. That may explain a little bit. There's also another seven year old. We moved to a new house. We built the new house. Well... we had it built for us, but that still involved a lot of effort on our part. Work. Other projects here and there. There's always a reason to not work on the boat - and once you stop, it begins to accumulate... Stuff. You can pile things on it as if it were a table, but without even taking up valuable table space. At some point, cleaning things up to where you can even begin working is a project in and of itself.

Two years ago, we began building a tree house. (Add that to the list of distractions!) So for the last eighteen months, there has been a pile of construction lumber keeping me away from the pile of odds and ends that were too heavy or awkward to be piled on top of the boat. I suppose I should have taken a picture, just to document the depths to which the project had sunk, but maybe it's just as well that I did not. This summer the tree house is complete. (Well, nearly so.) With the pile of lumber gone, I decided it was time to get back to work. After two weeks of cleaning up, throwing out, dusting off, and finding places for things, the boatshop (okay, it's a two car garage) is ready.

When I began construction in the summer of 2000, I imagined a boat that I would someday enjoy with my kids. Lately it has come upon me that if I don't get things moving again, my kids will grow up before it's finished. I don't imagine I'll find a lot of Big Work Days. My plan is to fit in an hour here, a couple hours there. Time that would otherwise be spent in frivolous pursuits - like reading Horatio Hornblower novels for the third time. Slow and steady progress is the goal, and eventually things will take shape.

As with nearly all of Iain Oughtred's designs, construction begins with a building frame. Station moulds are cut out and assembled on a strongback. I spent a great deal of time and effort making sure everything was square and level. Then the keelson, inner stem and stern posts are assembled, and the planking is formed around the moulds, and glued to the backbone with epoxy. At the time of our move, I had completed six of the seven strakes.

In the beginning phases of construction, the boat is upside down. After the hull and keel are complete, the boat is turned over, and the interior is fitted out. Now, if I had been clever, I would have made sure that the time of our move coincided with the time to turn over the boat. Alas, it was not to be. After the move, the building frame is not quite square, and not quite level. There is no difference to the naked eye, but running a string line through the holes I used to align the frame twelve years ago reveals that some moulds are up to 1/4 inch out of alignment, and some have a slight twist as well.

Well, finding this problem - that's the work I did. Does that count as work? After a nine year hiatus, I'll take it. Fixing the problem? That's a job for another day.