Preparing for the Keel

I've ordered 4oz fiberglass cloth, which I will use to sheath the hull. This is meant primarily for surface protection, especially for the edges of the plywood. I will most likely cover each plank separately, which means the cloth will not really add any strength to the hull, but that is not needed in any case. The cloth, and some additional epoxy, should be arriving soon, but as the temperature today is topping out at 13F (that's -10C) I don't know that I'll be doing much epoxy work any time soon. The System Three fast hardener will cure as low as 35F, but I ordered the medium hardener, as I probably will be doing most of this work when it is a bit warmer. 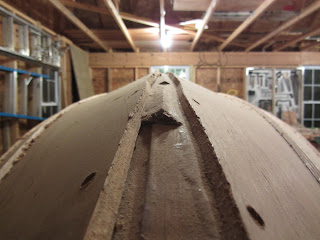 In the mean time, I'm starting to get the hull ready to accept the outer stem and stern posts and the keel. Where the planking meets the keelson I've left the overlaps rough. Before attaching the keel I'll have to smooth this out using the power plane. Over to the right you can see the view along the keelson. There are screw holes along the edge of the planking, those will have to be filled in with epoxy - which will also have to wait until the temperature warms up a bit. 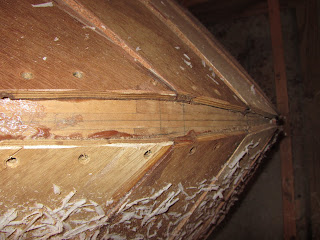 Here you can see the view down from above the stern. Here also, the plank ends are uneven, and will need to be planed down to make a smooth surface for the outer stern post. The view at the stem is similar. 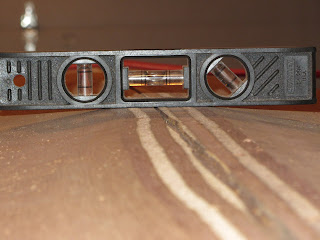 Keeping in mind what I've learned about using the power plane, I'm trying to take things nice and easy. I'm trying to go slowly, removing about 1/32 inch at each pass, and checking frequently with a level to make sure the surface is even. At first, I'm just taking off enough to make a level reference surface for the bed of the plane. After that, I'll go back and plane down until the width of the flat surface is equal to that of the keel. This will require a bit of thinking. As designed, the keel is 2.5" thick, with a bulge in the center section to accommodate a 4" wide lead ballast keel. I'll want to figure out just how I'll do this before I try to go too far. I'll need to see what kind of timber I can get for the keel before I can be sure how I'll get that done. 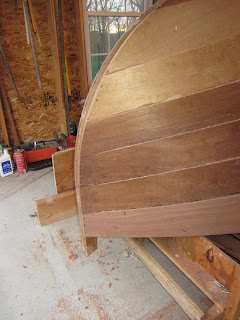 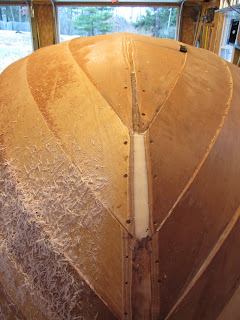 There is one area that is going to cause some problems. For some reason, which is lost to me now, I didn't recess the plank lands on the garboard at the stern. At the time, I filled in the gap with epoxy mixed with some sort of plastic filler, but making a fair surface for the keel to land on may be a bit of a challenge. Well, that's what makes life interesting, isn't it?

Until things warm up a bit, I'll have to look for ways to keep the project moving forward. I can make patterns for the outer stem and stern posts, lay out the pieces and glue them in the basement. I haven't decided whether these will be laminated, or sawn from glued up pieces, but I'm leaning toward the latter. That's what I did for the inner posts. I can also work on sanding the hull, in preparation for fairing and fiberglass. Most likely, it won't be too long before the temperature comes back up. In the meantime, well, it's ski season! Generally, the colder and snowier it gets, the happier I am. 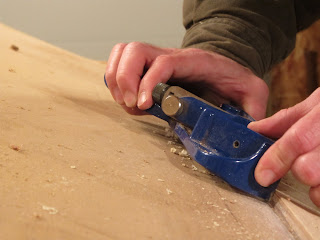 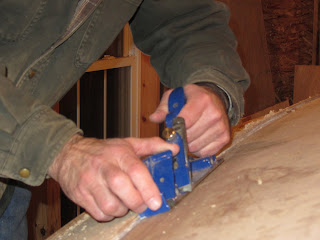